The year 2024 will mark the 200th anniversary of the birth of Bedřich Smetana - the composer who laid the foundations of Czech music and, in a broader context, also of Czech culture. On this occasion, let us commemorate the achievements and the legacy of a composer whose statues are placed all over the Czech Republic - probably too numerous to count - and after whom squares, streets and parks in almost every Czech town are named. 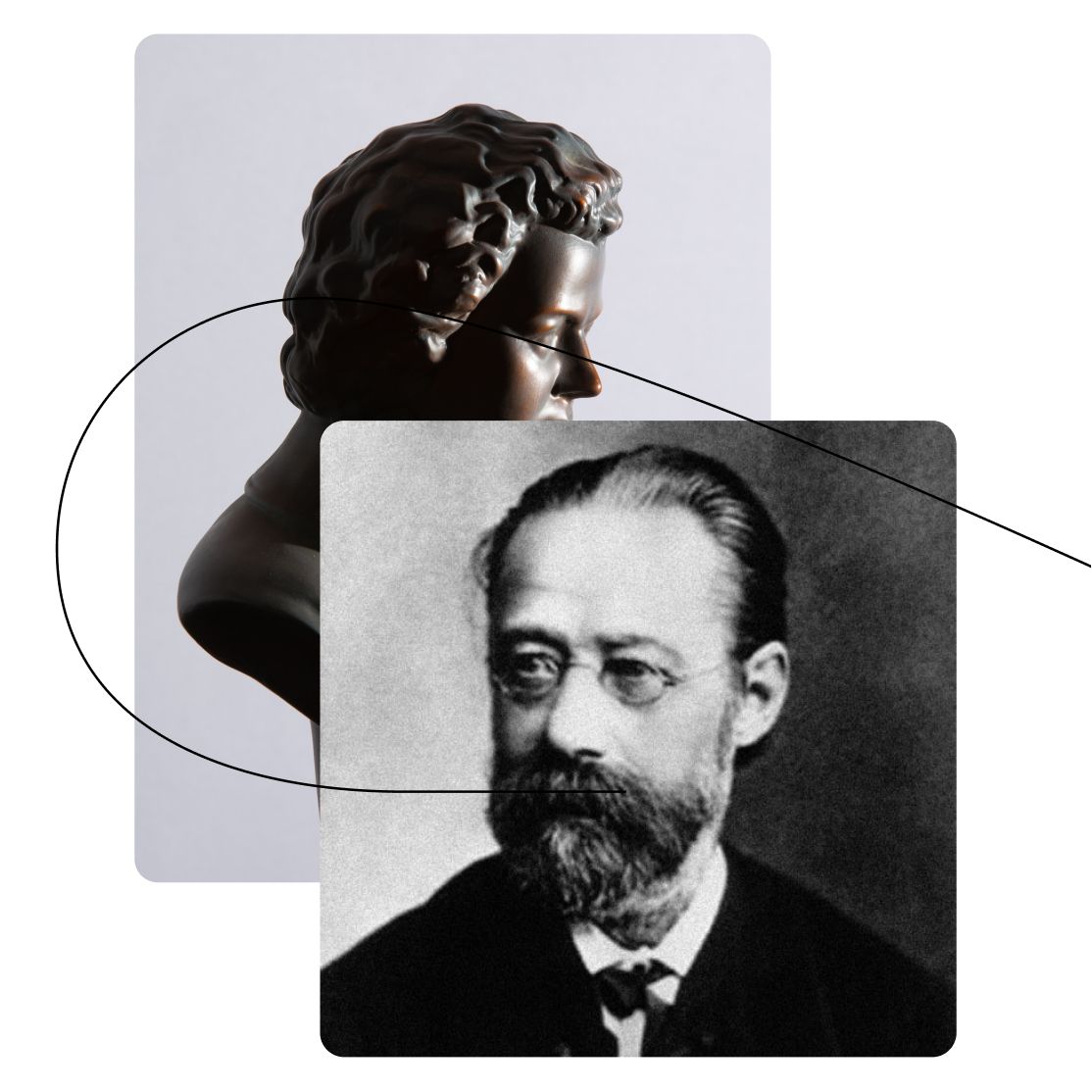 Life in a nutshell

Undeniably one of the most important Czech composers, his mark on music history has been present since the second half of the 19th century when he set the foundations of Czech music. He was born on 2 March 1824 in Litomyšl into a wealthy family of brewers. Where did his life journey lead him from then on?

Youth and the beginnings of an independent artistic career

Although Bedřich started learning to play the violin at a young age and first performed in public as a child prodigy at the age of six, he chose the path of a musician against the wishes of his father, who intended to pass the brewing trade onto his son. After graduating from grammar school in Pilsen, he moved to Prague to earn his living as a home tutor and to privately study composition. Already at this time he wrote his first works. His reputation as an excellent musician spread rapidly, and on the recommendation of his teacher, Josef Proksch, he played for the Emperor himself. He also met, for example, Franz Liszt, whom he deeply admired.

Sweden and the maturing period

Around the age of thirty, he was offered the position of a director of the Philharmonic Society in Gothenburg, Sweden, which he accepted and worked there from 1856 to 1861 as a respected composer, music teacher, pianist, and choirmaster. The stay was also enriching for him in terms of new musical impulses and broadening his horizons. From Sweden, Bedřich made his journey to Weimar to meet Franz Liszt, and it was Liszt who directed his attention towards program music. He composed his first symphonic poems while still in Sweden.

At the center of Bohemian musical life

Upon his return to Bohemia, he struggled for recognition, but after the successful production of The Brandenburgers in Bohemia and the even more successful Bartered Bride, he was offered to take up the prestigious post of the Provisional Theater Orchestra's Kapellmeister. Gradually, he became a major figure on the Bohemian musical scene. In 1868, his third opera, Dalibor, was premiered at the laying of the foundation stone of the National Theater, and the famous strains of his Libuše were heard for the first time at the opening ceremony in 1881.

The peak of creativity

At his creative peak, Bedřich was stricken with deafness associated with an incipient mental illness. Thanks to his musical imagination, he did not stop composing. He moved to live with his daughter in Jabkenice, where he wrote many of his masterpieces: for example, he completed My Country here, which made him famous far beyond Czech borders. He died on 12 May 1884 at the age of 60.

As part of the Smetana200 project, we are preparing an engaging monograph on Bedřich by Pavel Kosatík. Before it is ready, you can browse the Czech Music Dictionary of Persons and Institutions on the Internet, you can visit his birthplace in Litomyšl or the Bedřich Smetana Museum in Prague. Nevertheless, you might get the best of it if you simply listen to his music…

The Work of Bedřich Smetana

Many of us still remember the magical incantation 'Braprodalidvěhutačevi' from our musical education. Perhaps everyone can croon 'Let us rejoice and be merry' and 'I know a girl who has ducats'. The opening jingle of Czech Radio is as memorable as the fact that the well-known symphonic poem Vltava is actually reminiscent of the Czech folk tune Cat Crawls Through the Hole... But how many of us have seen any of Smetana's operas in the theater?

With his operatic work, Smetana not only laid the foundation stone of the National Theater, but also of the entire Czech operatic tradition. Smetana's work reflects a great national pride, which was in line with the current events of the time: he composed most of his operas in the Czech language (although his declamation was far from settled), chose librettos based on Czech history, legends and contemporary rural life, and he also liked to be inspired by local color.

The success of his first two operas, the historical Brandenburgers in Bohemia and the comic Bartered Bride, certainly gave him motivation and confidence. His third, this time a tragic opera - Dalibor, accompanied the aforementioned laying of the foundation stone of the National Theater, followed by the festive Libuše, intended for special ceremonial occasions, which Smetana was saving nine years for the opening of the National Theater (indeed, Libuše has retained this solemn spirit up to this day). This was followed by the conversational salon opera The Two Widows, and a trio of operas from the period of Smetana's deafness: the folksy Kiss, and his comic operas The Secret and The Devil's Wall.

The Festive Overture in D major was Smetana's first large-scale work for orchestra. He composed it in the tumultuous year of 1848 and infused it with the excited social mood of the time. He intended to dedicate his only “Triumphal” symphony to Emperor Franz Joseph I. He composed several other orchestral works during his lifetime, but there is one particular musical form through which he made an especially significant mark on the music literature: symphonic poems. Smetana began composing them during his stay in Sweden, where he wrote Richard III, Wallenstein's Camp and Hakon Jarl.

He composed his most famous cycle of symphonic poems, My Country, in the final years of his life and only after he became completely deaf. It reflects his compositional mastery, national sentiments, and his love for his homeland, expressed by means of admiration of its natural beauty. It also features references to history, and celebrates Hussitism - then a symbol of the Bohemian state's ancient glory. In its monumentality, significance, concept and scope, My Country has forever gone down in history as an utterly unique, time-transcending work, and belongs to the core repertoire of orchestras around the world.

A young piano virtuoso, Smetana began his compositional career by composing for the piano. He drew his primary inspiration from Mendelssohn, Chopin, Schumann and Liszt. Upon his return to homeland, he concluded his work for the piano with a concert fantasy on Czech national songs, while he also reminisced about Sweden in the concert etude On the Sea Shore. Afterwards, he put composing for the piano on hold for a long time, and only at the end of his life he wrote his supreme piano cycle: Czech Dances.

Many of Smetana's chamber works have strong personal, autobiographical features, which is strongly reflected in his essential, deeply subjective compositions: the Piano Trio in G minor, which he wrote in grief after the death of his daughter Bedřiška, the String Quartet No.1 in E minor, subtitled “From My Life”, and the String Quartet No.2 in D minor.

He also focused his attention and compositional activity on choral music, especially during his time in the Hlahol Choral Society in Prague, and at the end of his life in Jabkenice. It should be mentioned that most of his choral compositions are quite demanding, as he used his knowledge of instrumental music (Three Horsemen, The Renegade, The Peasant, The Song of the Sea, Czech Song, etc.) in composing them, and he was primarily concerned with artistic quality rather than with convenience of performance. Among the less demanding choral compositions, however, are those that he wrote on commission, such as the Festive Choir for the Unveiling of the Karel Havlíček Memorial in Prague, the Three-part Choir for the Girls' School Songbook, and the male choirs The Dower and The Prayer. For the 20th anniversary of the Hlahol Choral Society, he composed his only song cycle - Evening Songs for voice and piano - on poems by Vítězslav Hálek.

Smetana200 is accepting applications from organizers and initiators (from major cultural institutions through associations to individuals) of any project or event related to the celebration of the 200th anniversary of Bedřich Smetana's birth. You can sign up to the Smetana200 brand, by which you will gain media support, while you will support this project in return by employing our logo in your promotion.

Apply for the dance competition

Apply for the dance competition via interactive form: (deadline 1 June 2023).